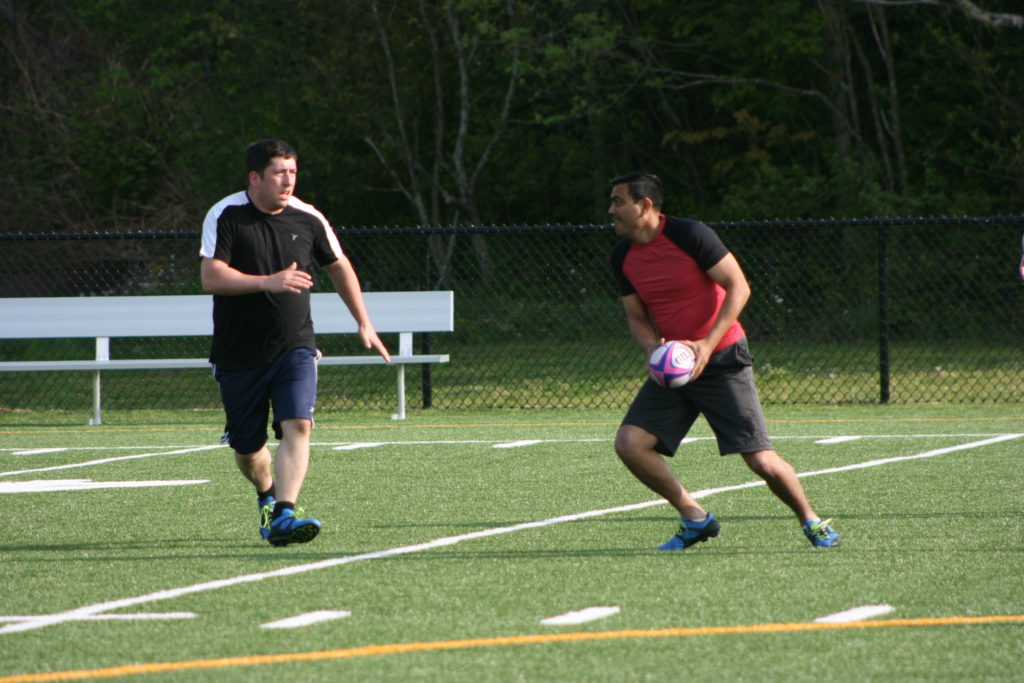 When Amit Tamrakar moved to Canada from India in 2003, he had barely heard of the sport of rugby and he definitely didn’t play it.

“You might get injured a lot, so that was one of the reasons I never played rugby or football,” he said, instead sticking with popular sports such as soccer that appealed to his enjoyment of running but was not a contact sport.

Last year, though, Tamrakar was one of 30 other Saint Johners who decided to give touch rugby a try, registering for the Saint John Co-Ed Touch Rugby League in its inaugural season.

Tamrakar said he heard about the league from his co-worker and league president Josh Wells, who assured Tamrakar it was a safe sport.

Playing in a six-on-six format, touch rugby uses the same rules as traditional rugby but instead of tackling opponents, you touch them with one hand to prevent them from scoring points. Once an opponent is touched, they then initiate a backwards pass through their legs to a teammate who can then try to advance down the field with their teammates. Also unique to touch rugby is that if a team cannot get a “try” or score within six touches down the field, the ball will be turned over to the other team.

“It’s a very minimal contact sport but, the big thing is, the focus of the game is on your passing and catching so that you can open up defenders so you can go score, basically,” Wells said. “That’s taking the elements of the rugby game in catching and passing so it’s a way to hone in on those skills and obviously improve your fitness.”

As someone who used to play competitive rugby until 1999, Wells said he was searching for a safer way to play the sport as early as a decade ago. He decided in 2015 to create a touch league for the city after hearing of the sport’s popularity overseas. He said he modeled Saint John’s league after the summer and winter league that was already established in Fredericton, limiting the league to four teams and getting the equipment and field times necessary to start their season in 2016 at the Shamrock Park Turf Field.

Wells said he was impressed with the make-up of the four-team league last year, including eight players who had never touched a rugby ball before. He said touch rugby represents an opportunity for people to give the sport a try or use it as a stepping stone before getting more involved in the sport.

“That’s what’s good about it because you can come out with no experience at all, not even knowing what rugby is, and obviously we both teach the skills of how to play, but like I said it’s the passing, running on the field,” Well said.

After playing in his first season, Tamrakar is one of 10 people who have already signed up for the 2017 season. Registration opened on Feb. 20 for a maximum of 40 registrants. Wells said they will be running a longer season this year with 12 games beginning on May 4 and a clinic on April 27 for those interested in trying out the sport.