The fifth anniversary season of the Saint John Touch Rugby League concluded with a last second try by the Green Giants to take a 5-4 victory over the Pink Banters. The Pink Banters just scored to tie the game at 4 apiece and then off the tap restart with support the Green Giants scored. Congrats to the 2022 Spring Season Champions – GREEN GIANTS.  David Darrah scored three tries while setting up the last second try to Luke Johnson after the tap restart. Chris Barry also had a single try for the Green Giants. For the Pink Banters, single tries were scored by Claire Hague, Dave MacGowan, Chad Sooley and Jules Ouimet. 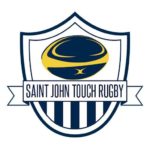