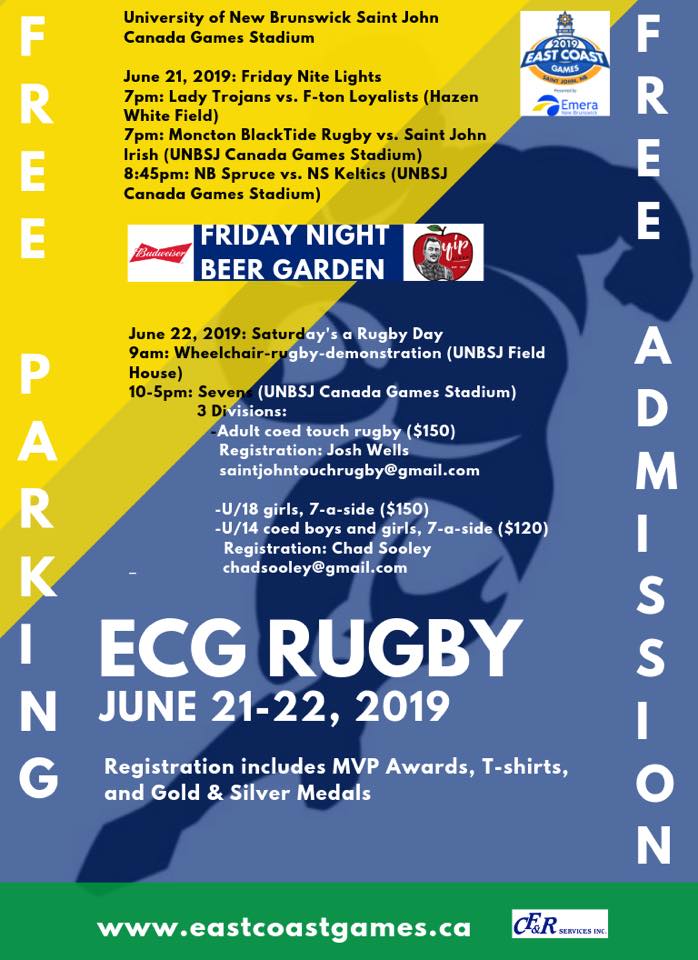 We are pleased to announce to be entering into the 2019 East Coast Games!!!

We are having a Four (4) Co-Ed Touch Rugby Team Tournament on Sat June 22nd between 10am and 5pm.

***NOTE*** There is also a Rugby 7’s tournament occuring in between our games so it’s a Rugby Day on Saturday!

For more information or to Register (either a Team or as an Individual), please go to:

It’s going to be held at the Canada Games Stadium!

– We will be accepting 4 teams.

– Players must be a minimum age of 18 or older

– Individual Registration – if you would like to join a team, sign up to enter a Player Pool. If a team needs a player, they will reach out and at that time it will cost you $15 to confirm your spot.

– Players must be a minimum age of 18 or older

The main purpose of the tournament is to have a team of mixture Rugby Skill levels (New, Current and Retired Players)

* Try to limit the Current Players to only 2-3 to ensure Teams will have a mixture of Skill Level but this is only a recommendation.

– Each Team will play the other team for one match

– Federation of International Touch (F.I.T.) Rules will be applied

– 6 players allowed on the Pitch with at least 1 Female and 1 Male Player at all times.